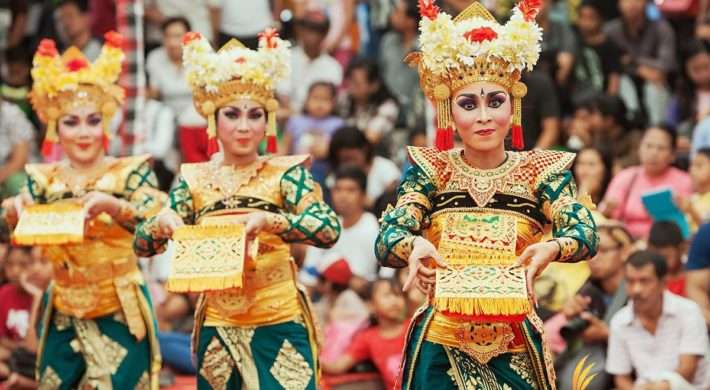 The classical Legong Kraton Dance was performed for king’s entertainment. It is performed by three girls dressed in gold brocades and flowered headdresses. The story tells King Lasem kidnapped Princess Rangkasari, the daughter of Daha King. Her brother demanded King Lasem to set her free otherwise facing a war but the king refused. On the way to the war he met an eagle that was a bad omen and eventually he was killed. Other dances will also be performed such as:
Baris Warrior dance, Tambulilingan Bumble Bee Dance etc. (Sumptuous dinner will be provided in
a local restaurant nearby, just for price1). We will witness the performance of Monkey (Kechak) Dance, the most unique dance among Balinese dances. It is not accompanied by any instrumental music, but by a male chorus performed by over 70 men. Their hands and torso movements with sudden jerks swaying back and forth illuminated by torchlight, gives an unreal impression. In the middle of the circular stage, The Ramayana Story will be performed as the Hindu version of Romeo and Juliet but with happy ending. Afterwards will be performed Sang Hyang Dedari (Heavenly Nymphs) Dance in which two pre pubescent girls will dance the same and unison movements with closed eyes, and Sang Hyang Jaran (Fire) Dance in which the dancer while in trance will dance over a bonfire made of coconut husks without getting hurt. Keeping you safe during COVID-19

Your health is our priority

Our holiday packages here have been proven to be guaranteed and safe, and we have summarized this package in several packages that you can choose from.

Our travel company was established in 2000 and ever since it has been able to earn an excellent reputation on the travel market. Our team consist of young Balinese people and by our young spirit we had stated that our ideal is to survive in tourism business.